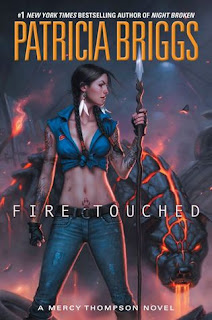 Fire Touched is book 9 in the Mercy Thompson series. In this installment, we get quite a bit of fae action as well as face time with the werewolves. The fae have all hunkered down into the reservation, and two of my favorite characters (Zee and his son Tad) escape much to the Grey Lords displeasure. Mercy and the gang are going to have to deal with the fallout and it makes for an interesting book.

We start off immersed in the action, the werewolves find out there's a troll on the loose and they rush to save the day. We soon find out the fae sent the troll after Zee, his son Tad and a young man named Aidan because they escaped from the fae reservation. After the battle with the troll Mercy decides to claim the Tri-Cities as the pack's territory and will be protected by them. This I knew would cause issues in this book and/or future ones since there are so many paranormal beings that like having power plays in her world. The Grey Lords (head honchos of the fae) want Aidan back but Mercy has given him sanctuary so I figured a fight would break out. The fae are so devious I think that's why I enjoy their installments so much in this series. Mercy manages to strike a bargain with the fae for a peace treaty though and this is how they wind up heading to Underhill and having to bring an artifact back. It doesn't seem like much but artifacts can have significant power, but with so much on the line I worried something might happen to our leading lady.

Fire Touched was a great installment showing us everything we've come to love about the series as a whole. I really enjoyed seeing the pack growing more to accept Mercy as one of their own, there are still issues with a few members not liking her but I feel like she's growing on them slowly but surely. I've also enjoyed how Mercy isn't afraid to take in anyone that needs her help. She's a strong character and I'm pretty much addicted to this series because of her. I can't wait to see what happens next. If you haven't started this series yet I'd recommend it for fans of Urban Fantasy with not too much romance mixed in.