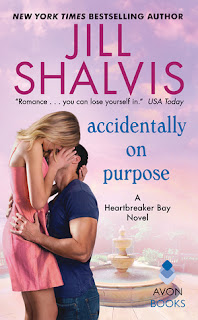 Accidentally on Purpose is book three in the Heartbreaker Bay series. I've fallen in love with this group of friends that the series revolves around and had to get Elle and Archer's book. There has been so much tension between the two in the other novels I knew it would be a great read and I wasn't let down.

Elle Wheaten is a building manager that is a no nonsense type of gal. I've enjoyed her character in the previous books and was so excited when I heard this was going to be her story. She acts like nothing can ruffle her feathers but it's nice seeing inside her head for a change. In the past few books we get details on Elle and Archer, they're friends that keep denying that they both want a relationship but you can tell they have great chemistry. They butt heads quite a bit since neither wants to give in to the other and I couldn't wait to see who would crack first and admit they wanted something more than friendship.

Archer Hunt is the head of a security company that does odd jobs ranging from a stake out to investigations. He's all alpha male and protects his friends no matter the cause. We find out that Elle and Archer actually have a past, he rescued her while she was a teenager from a bad situation and put his law enforcement job on the line. Even now he's looking after her, she's finally given up waiting on Archer and started going on dates only to have Archer scare off the guys. I found that so amusing since he doesn't want to admit he wants her but no one else can have her. One thing leads to another and Elle and Archer finally admit their feelings only to have the past spring up and dangerous situations arise.

Accidentally on Purpose is a story about friends becoming lovers with two headstrong characters that want it done their way. I loved how much tension there was between the duo, spats like this in books can easily turn me away from liking a character but this was done really well and enjoyable. Elle's character has been through a lot and I'm glad we got some background on her. I've come to really enjoy this series and would recommend it to fans of Contemporary Romance revolving around a group of friends.