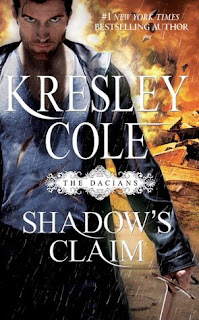 Shadow's Claim is book 13 in the Immortals After Dark series. I somehow skipped this book when going through the series. I'm glad I noticed since Trehan is a yummy alpha male and I really enjoyed this novel!

We start off with Princess Bettina dealing with her guardians that set up a tournament for her hand in marriage. She's getting cold feet with this whole situation and is trying to find a way out of it. This is when Trehan Daciano makes his entrance, he's hot on the trail of someone that broke a law and he's sent to dispatch justice (ie: death). That's when he figures out that Bettina is his mate and the only way he can claim her as his bride is to enter the tournament and kill off the competition. And oh man what a competition it was!

Shadow's Claim is an alluring read with paranormal characters battling it out gladiator style. It was fast paced and really kept my interest. I felt this was a good mix of characters, Trehan is an older than dirt vampire and Bettina is a youthful virgin demoness/Sorceri. While most of the time the virginal characters make me roll my eyes this one didn't. Bettina's convinced she's in love with another man but realizes her mixed feelings for Trehan are growing as the novel progresses. I really enjoyed their story and hope to see more Dacian novels in the future. All in all, if you're a fan of paranormal romance and haven't read this series I highly suggest it.