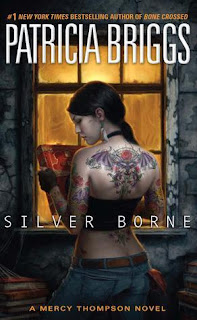 Silver Borne is book five in the Mercy Thompson series. I've been enjoying this series as it progresses and with Mercy finally picking Adam I was curious to see how the pack dynamic would be. While we do see a bit of that, we're mainly focusing on the fae in this installment.

We jump right into the mystery element that encompasses each book when Mercy tries to return a book of the fae that she borrowed. The bookshop owner winds up missing and probably in danger so of course she's on the case! We wind up immersed in dangerous fae situations that could potentially harm Mercy and the ones she cares for. In the meantime the bad news is that Samuel is losing control, and his wolf is taking over. That's generally a death sentence for any wolf but Mercy is trying her best to ground him and bring him back before anyone finds out. So basically Mercy is juggling trying to figure out what happened to the bookshop owner and if possible save him while helping Samuel and getting in trouble in the meantime. It lead to an interesting read and I think the fae books intrigue me the most in the series so far. I'm thinking it's because the fae are dangerous and always lead to surprises I don't see coming.

Silver Borne kept me on my toes and had me wondering how Mercy was going to figure everything out before time was up. We learn a bit more about the fae, and get to see some new characters in the meantime which is always nice. All in all this was a solid addition to the series and one of the most dangerous situations Mercy has encountered yet. If you're a fan of Urban Fantasy and haven't read this series you need to pick it up!