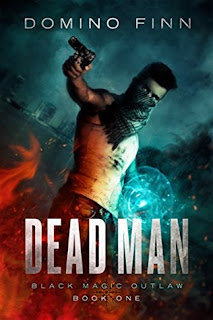 Dead Man is book one in the Black Magic Outlaw series. I ran across this book and was intrigued by the necromancer aspect. I've had a few issues in the past with male POV but this one kept me entertained for the most part!

We start off immersed in action meeting Cisco Suarez, a necromancer that wakes up from the dead with no clue what is going on. He has voodoo gang guys chasing after him wanting to kill him and no idea how he's alive. It turns out 10 years has passed since he can remember and has no idea who killed him or why his family is dead too. Upon trying to figure everything out it seems that someone is trying to hurt anyone he comes in contact with. No one is safe and with no one left to turn to, he has to stop whoever is behind all this before everyone he cares for winds up dead.

Dead Man was a fast paced Urban Fantasy full of action and paranormal elements. It's been awhile since I've read something like this and it was long overdue. I really enjoyed Cisco's motivation, it reminded me a bit of The Crow in the aspect of rising from the dead out to seek vengeance. The only thing I didn't care for was how things were explained while reading. Cisco would mention something that the reader wouldn't know about (black magic/necromancer terms), then fully explain it. It just rubbed me the wrong way since I like to be in the characters head and most people don't think that way. It was still a great read, though, and I think fans of non-stop action in Urban Fantasy would love this book!