Beauty and the Billionaire: The Wedding - Jessica Clare
In this all-new novella in the New York Times bestselling series, Hunter and Gretchen are finally tying the knot—but their wedding may not be the easy fairy tale they’ve dreamed of...

Someone's out to ruin Gretchen's happy-ever-after on the eve before the big day. Can she trust Hunter, the man she's given her heart to? And can she rely on her sister Daphne (the least reliable person of all!) to help her salvage things? Or is this marriage going to go down in flames before Gretchen and Hunter ever get to the altar? 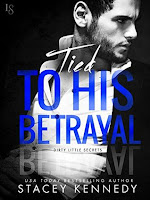 Tied to His Betrayal - Stacey Kennedy
In a dazzling novel of passion and power from the bestselling author of Bound Beneath His Pain and the Club Sin series, a commanding man gives up his most prized possession to win back the one that got away.

Darius Bennett can’t live without supreme control. A self-made billionaire, he’s rich enough to get anything—and any woman—he wants, yet he’s still haunted by a broken relationship. Five years ago, Darius let Taylor Erikson go because he knew he could never give her what she truly wanted: his heart. But the moment Taylor walks back into his life, bruised and beaten, Darius blames himself. To make good on his betrayal, he vows to help her heal—in and out of the sheets.

Once upon a time, Darius was Taylor’s world. Now his fierce embrace is exactly what she needs to get back on her feet. But Taylor pays a heavy price for her sizzling nights with Darius. As the emotional ties become stronger than ever and the paparazzi hunt her down for their next juicy story, Taylor must face some hard truths. They can’t go back. And to move forward, the key to loving Darius isn’t about keeping his secrets—it’s about exposing them.

For the Bear's Eyes Only - Kathy Lyons
BEAR ON THE PROWL

Life as Alan Carman knew it is over. After he was captured and tortured by a mysterious enemy, the lawyer's latent grizzly-shifter DNA was triggered. The old Alan is gone, and in his place is a terrifying vicious beast that lives and breathes for revenge. He will track down the person who did this to him-and it'll be the last thing he ever does.

Tonya Kappes refuses to let Alan run headlong to his death. A bear-shifting deputy-and the Gladwin Clan's beta-Tonya faces Alan with one weapon: the love that's lingered between them since they were kids. But the idealistic man she knew has changed...into something raw, primal, and unbelievably sexy, igniting every lustful cell in her body. And, if Alan can't learn to love the beast inside himself, maybe he can love the animal in her . . .
Posted by LilyElement at 12:00 AM