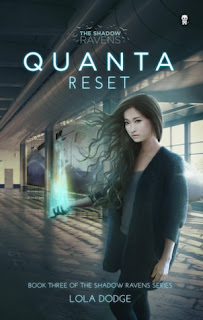 Quanta Reset is book three in The Shadow Ravens series and is the second book told in Quanta's POV. I've enjoyed the other books in this series and will be intrigued to see which book comes out next. The original idea behind the series was to have three different authors write three different interconnecting books with different lead characters. But we've had two with Quanta so far written by Lola Dodge, love that author by the way! So I'm not sure if Quanta will get another book next or if it will change character and author. I can't wait to see!

So we start off Quanta Reset just a little bit after where book two ended. Quanta has escaped with Altair and is in the Shadow Ravens' compound trying to hone her abilities. A refresher in case y'all haven't read the series or forgot. Quanta has the ability to see the future, including each and every little possible choice and the different outcome it would result in. It's extremely draining on her, especially when she's around so many people on the compound. While Altair is helping her center herself, nothing else seems to be helping and Quanta is losing control over her abilities. It's not an ideal situation since an unstable Red Helix (people with abilities like Quanta) is a very dangerous situation. In the meantime, Quanta sees something unsettling, and our duo has to go on a mission. Their journey had them in situations I didn't see coming and kept my intrigue along the way.

Quanta Reset really showed the struggles some of the Red Helixes could have while living among others and it kind of broke my heart. I enjoy Quanta's character and to see her struggling so much was hard. Her abilities were growing stronger and I'm hoping she finds a way to control them more in the next installment. We got to see a few scenes with the leading lady from book one and her man, which was a nice little addition since I've wondered how they were doing. With the events in this book, I feel like we're gearing up for a bigger fight with the bad guys in the near future, which is what I'm most excited about. All in all, this was a solid addition to the series and I think anyone that likes a bit of New Adult mixed with paranormal abilities would love this series.