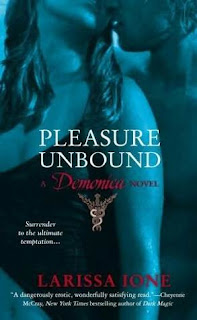 Pleasure Unbound is book one in the Demonica series. I've had this series on my TBR for quite awhile now and when I saw the audiobook was on sale I grabbed it immediately. This book revolves around a demon slayer and a demon that comes to her rescue. Not exactly a match made in heaven, but it sure leads to an interesting listen!

The book starts with us meeting Tayla Mancuso, a demon slayer that winds up at a demon hospital due to injuries. The doctor on duty, Eidolon, does the best he can to fix her injuries but he notices that she's half demon and probably doesn't know about her darker half. They're constantly at odds throughout the book but on the romance aspect it was hot and the sparks flew quickly. Tayla's demon half is trying to take control and she's slowly but surely not able to hide it. She'll have to decide to stay human, or let her half demon flag fly and go against everything she believes in.

While the story itself was pretty good, it took me forever to figure out what was going on. With the constant POV shifts I had trouble figuring out who was who until after the halfway point. I'm going to assume the book version would have been better for me than the audio in that aspect since the cast was quite large. Some of the content pissed me off, mainly because of Tayla and her beliefs. I'm going to leave it at that or I'll start ranting. Her character and the confusing POV shifts were the main reason I rated this book a 3. That being said, now that I have a decent understanding of the world and characters, I would pick up book two and might even have a better time with it. If you haven't read this series, I'd suggest grabbing the book version instead of the audio, but would suggest it for Urban Fantasy or demon enthusiasts!