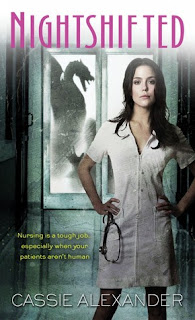 Nightshifted is book one in the Edie Spence series. This series revolves around Edie Spence, a nurse that works in a secret hospital wing that takes care of paranormal patients. The patients range from dragons, zombies, vampires, you name it she's probably seen it. It's an interesting start to a new to me Urban Fantasy series, and I already know I'll be getting book two soon.

Edie Spence is your everyday human nurse that trades working in a secret hospital wing caring for paranormal patients for keeping her drug addicted brother clean. The pay isn't great, but Edie is hanging in there. That is until one night when she accidentally causes a vampire to die. His dying words were to find Anna, and Edie decides to actually do a big of digging and see if she can. It opens up a huge can of worms and lands Edie in very hot water with the vampires. Now she's left trying to find Anna before she's taken before the vampires and sentenced to death. It's a rush against the clock with close to no leads.

I've had Nightshifted on my bookshelf for awhile now but I'm glad I picked it up the other day! I'm so used to seeing Urban Fantasy novels revolve around some sort of paranormal character, so this one stood out to me since Edie is 100% human with no powers at all. The paranormal beings were awesome and probably my favorite thing to see while reading. We get our run of the mill vampires, a hunky zombie love interest and a crazy STD infected dragon running around. It was a very entertaining book and I enjoyed the bits of Edie trying to figure out where Anna is and how to rescue her. All in all, I'd suggest you grab this if you're a fan of Urban Fantasy and want something a bit different from the norm!