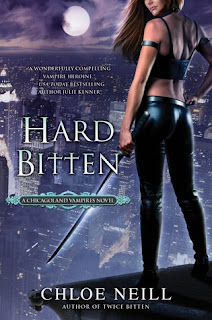 Hard Bitten is book 4 in the Chicagoland Vampires series. This book revolves around Merit and the Cadogan House vampires. Merit was turned into a vampire with no choice in the matter and is adjusting to their ways. It's lead to her coming to realize they have enemies, but also allies and must rely on their strength and skill to survive. I kept hearing that there was a book that pissed off readers, and I'm fairly certain this was that book.

So in Hard Bitten, we have the shifters staying in Chicago and coming out to the press about their existence. The city is not pleased that they exist and are taking it out on the shifters as well as the vampires. The only good thing is that the shifters and vampires have each other's backs in this, though there are no formal alliances as of yet. Since that drama isn't enough to fill the entire book, Merit and Ethan are asked to go to the Mayor's to discuss something. We finally reach the point where the past one or two books have lead up to, the blood raves. Vampires, they think rogue ones are having raves and feeding on humans to the point where some are dying. The Mayor has gotten word of it and insists that if it is not stopped he'll personally make sure that Ethan winds up in trouble for it all. It's not that easy for Merit to investigate though since the raves are invitation only. Basically, everyone winds up in a whole lot of trouble and they have to figure it out before everyone turns against the vampires.

As I mentioned earlier, I'm pretty sure this is the book that made readers mad. That ending was unexpected and I like my characters to stay dead if they die so the next book or two is going to be interesting to read. I'm really not sure what to think. The blood raves in this novel kept me entertained, but everything I'm thinking of right now is how the book ended. The characters were on par with the previous installments and we got a bit of face time with Merit's BFF which I enjoyed. All around I'm enjoying this series and think if you haven't read it and enjoy vampire books, you might love these.