Review: Magic to the Bone by Devon Monk 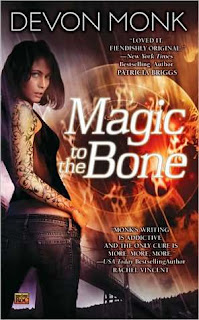 Magic to the Bone is book one in the Allie Beckstrom series. This was my first Devon Monk book and it's been on my TBR for forever now so I'm glad I finally got around to it. The magic elements in this world were unique and I really enjoyed learning a bit about it.

Allison (aka Allie) Beckstrom is the daughter of a wealthy business man but wants nothing to do with him. Instead of living on daddy's money, she works as a hound, if a magical crime is committed she's able to sniff out the spell caster. Think of it as a PI/bounty hunter job but toss in magic. She takes one gig and it leads her to someone unexpected. But things decide to get a bit crazy and she winds up having to go on the run. Along her side is Zayvion Jones, a man hired by Allie's father to watch over her. There were sparks between the two, and I'll be curious to see where the series takes them. While on the run, Allie and Zayvion have to figure out who is behind the magical assassination before Allie is framed for it all.

With this being my first DMonk book, I'm impressed. There's quite a few UF books out there with magic in an urban environment, but DMonk really made this one unique and enjoyable. The magic elements were really different from anything I've really seen. Some people are allowed and able to use magic, but everything you use has a consequence. Whether it be a headache, a bruise, pain or even memory loss, magic isn't supposed to be used lightly. I think I really enjoyed that because it means we won't have one all mighty powerful main character that can just blink and nothing bad ever happens to her. All in all, if you're a fan of Urban Fantasy and haven't read this series yet, I'd suggest you grab it!