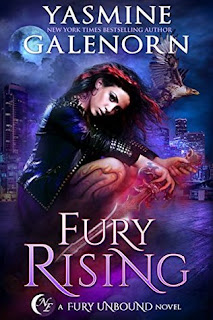 Fury Rising is book one in the Fury Unbound series. When I saw that YGalenorn was releasing a book with mythology mixed in heavily I knew I had to grab it. In this book, the main character is a Theosian, a minor goddess that does the bidding for Hecate, the goddess of the Crossroads. And as you can imagine her missions aren't always easy going.

So we start the book meeting Kaeleen Donovan aka Fury, the Theosian (minor goddess). She's out searching for Abominations, soul eaters that are on the prowl for their latest victim. They're hard to take down but Fury isn't one to shirk her duties. She does some other missions from Hecate and we even get face time with the goddess which I was glad to see. The main event is when Hecate tasks her in finding the Thunderstrike, an ancient artifact that has weather magic. Someone stole it and is wreaking havoc with it around their city. The gods and goddesses will not be pleased and Fury has to find it before the goddess Gaia decides to wipe out human kind.

In a rich, new environment, Fury Rising is the start of a promising new series. Like YGalenorn's other work, this book is Urban Fantasy with romance aspects intertwined. My favorite bits are the strong friendships the main character always has, as well as the fight scenes. It's not easy on Fury, but it's nice to see her support system backing her at every step. This series has a bit of every paranormal I could ask for including fae, shifters and gods/goddesses. I really enjoyed seeing all the different types of characters. On the romance aspect, I know who I'm rooting for, though there is a slight love triangle feel in the story. But while Fury might have a huge crush on one character I don't think it will work out. We'll see where it goes in the future, though. I do hope we get face time with more gods/goddesses in the next book, I can't wait to see where the series leads. All in all, if you're a fan of YGalenorn's work, or like Urban Fantasy with romance mixed in I think you'd love this book!