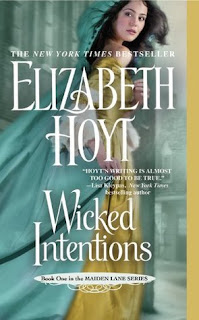 Wicked Intentions is book one in the Maiden Lane series. Since I'm recently back into Historical Romances I asked for some suggestions and wound up with this gem of a read. It was quite enjoyable, though a bit different from the other HR author I've been binge reading/listening to. I'll be adding EHoyt to my list to read more of.

The book starts with Temperance Dews, a widow who runs an orphanage with her brother. She's out late at night to collect a baby girl and bring her back to the house. Even though she and her brother, Winter, can barely run the house currently, they still bring in children that are in need. Temperance is stressed, Winter is stressed and when she walks into another room in her house, she spots an aristocrat that broke into her house and has a bargain of a lifetime for her. Temperance must escort Lazarus Huntington, Lord Caire around St. Giles and he will pay her handsomely. He'll even introduce her to other aristocrats in attempts to find someone to give money to the house. She can't turn him down, so she accepts but has no clue what he is truly after.

After their agreement is made, Lazarus Huntington starts to come by every few nights to collect Temperance and they go on the prowl throughout the dark and dangerous streets. He needs her to help find his mistress's murderer. He's a prickly man that doesn't like to be touched and really doesn't like being around anyone. I loved seeing his character's icy exterior chiseled away with each encounter with Temperance. We see him slowly start accepting Temperance and her ways and even come to crave her companionship.

Wicked Intentions kept me on my toes and loving every minute of it. We're trying to figure out who killed Lazarus's mistress and who is attacking Lazarus as he comes closer to the culprit as each night passes. I loved the relationship between Temperance and Lazarus, the characters were engaging, even the prickly Lazarus. I'm loving the Historical Romance genre and rather enjoyed this book, I'd suggest it if you haven't read this series yet.