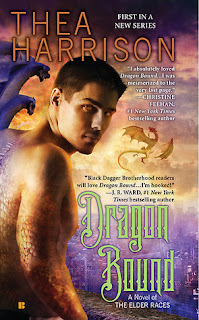 Dragon Bound is book one in the Elder Races series. This book focuses on the half-human half-Wyr, Pia Giovanni. Her mother taught her from a young age to always hide from other Wyr and to never expose her heritage though she really doesn't know much about her heritage. Her ex-boyfriend who knows more than he should about Pia and what she happens to be is deep in debt and comes to Pia for help. She's blackmailed to go steal something from pretty much the most powerful being of the Elder Races, Dragos Cuelebre. He's rich, old as dirt and super powerful, oh and a dragon. He has his treasures spread out into different hoards all around and Pia manages to get in one and steal a penny and hightail it back to her ex-boyfriend to hand it off. Worried sick about the ramifications, she leaves town hoping Dragos won't be able to track her down.

Things don't go as planned for Pia though and Dragos winds up finding her. He's quite nice about the whole thing after awhile. They wind up having issues on their way back home though and have to escape a prison of sorts. They grow closer with each little adventure, and I enjoyed their relationship. Pia tells it like it is after she got used to Dragos and knew he wouldn't hurt her. She's probably the only one in his group that has the balls to do that and I think it just made him more intrigued by her. There are feelings on both sides, but Dragos is most definitely a possessive alpha male and he views her as his. I love alpha males in Paranormal Romances, so I enjoyed his character. There were a few surprises around the end that I didn't see coming which kept me on my toes.

It's taken me forever to get around to reading Dragon Bound, but I'm so glad I did. I love dragon books, and Dragos was just the alpha male I was hoping for. I'll need to see if their story continues throughout the series or if it changes to another set of characters. If you haven't read this series yet, I suggest you pick it up, especially if you enjoy dragon characters.