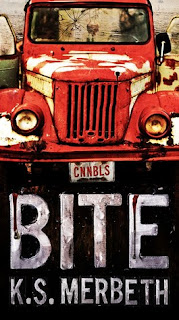 Bite is a book set in a post-apocalyptic environment and is showing how people are surviving. Everything is pretty much a desert wasteland and people are doing anything they can to survive. Our leading lady is a sixteen-year-old who is referred to as Kid. She's wandering around by herself when a group of people stop by and offer her a ride. Against her better judgment, she joins them and heads to a nearby town. She finds out too late that they're there to raid the town and that they're sharks (aka cannibals). Sharks are the most hated people in this environment and everyone would happily shoot them on sight.

Even knowing they're cannibals I was enthralled with their diverse group. They were so entertaining and I think that's why I loved this book so much. Wolf is the leader of the group, he's a big man that isn't afraid of anything. He doesn't always make the best decisions but the team follows his commands. Dolly is a strong and silent woman that is quite deadly, you don't want to be on her bad side, she's one of my favorite characters. Tank is a big man that is more brawn than brain, I picture him as a big teddy bear though because of how he treats Kid. And lastly, we have Pretty Boy, who is exactly as he sounds, he's pretty and is actually quite skilled in deceiving others to benefit the gang. They all work well together and I can see how they've survived for so long out there raiding towns.

I really thought Kid would wander off and do her own thing after the initial fight with the first town. But she hangs in there and they attempt to raid another town. That's when things get a bit complex and we hear that someone is putting out the word of their group and most of the towns know to watch for them. They have to figure out what is going on and their journey only just starts there. This does have a Mad Max feel, and I think anyone fond of post-apocalyptic books would enjoy this one. Bite is a no holds barred journey through a post-apocalyptic wasteland and you don't want to miss it.