Review: When a Scot Ties the Knot by Tessa Dare 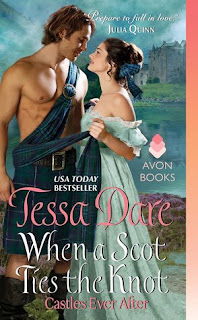 When a Scot Ties the Knot is book 3 in the Castles Ever After series. This is the first Historical Romance I've read in over ten years, and I'm so glad I won this novel! I absolutely loved it and already know I'll be reading more in the near future.

Madeline Gracechurch (aka Maddie) is an extremely shy girl that loves to draw. She has panic attacks / anxiety attacks when around groups of people so that will put a damper on all the events she's supposed to attend to find a suitable husband. So Maddie did what anyone not wanting to be part of their first London season would do, she pretends she's met the love of her life and has to wait for him. Her family accepts everything she's said and she is left to live her life how she wants. She writes her imaginary Captain Logan MacKenzie for years before she cannot tolerate lying to everyone and kills him off. Imagine her surprise when a gentleman comes calling and it's a Scottish Captain named Logan MacKenzie. You see, Maddie thought the letters would never make it to a real person, but they did all along. Logan is swoon worthy and has his own agenda, but is set on marrying the girl that has been writing to him for years.

I love books that start relationships based on lies, it always has me intrigued on if they're going to get found out, or who will fall for who first. This one was a bit different since the lying was from the main characters to everyone else in their lives. My favorite thing in this book has to be the characters, they drew my attention and I loved Maddie's character from the start. TDare even adds in details like Maddie is drawing the life cycle of two lobsters, Fluffy and Rex. It's that attention to detail and the romance aspect that really made this an awesome read for me. I highly suggest you grab this one if you're a fan of Historial Romance.