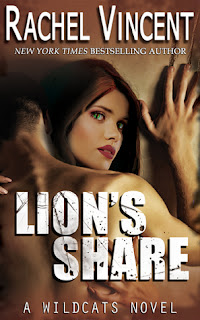 Lion's Share is book one in the Wildcats series. This series is a spinoff from Rachel Vincent's Shifters series. I loved the Shifters series, so knew I had to get this book when it came out. One of the young tabbies that were introduced to us in the Shifter series is the leading lady in Lion's Share. There is a free novella (Hunt) that starts this series if you're interested, I suggest grabbing it before you read this one since the events in it lead up directly to this book.

Abby Wade is your typical college girl, with the twist that she's one of the few tabbies in a shifter pack. When her pack leader, Jace Hammond, comes to get her for the break, she has to go. There have been some issues nearby them and they have to investigate. A rogue shifter (not part of the pack) is killing humans and leaving their bodies to be found. It's not good and puts the shifters on edge since it could expose them. Their investigation just leads to more issues and danger. On top of that, I knew Abby was hiding something but couldn't guess what until it was revealed. I love when the author does that and it's not out of left field.

Lion's Share has everything I could ask for in a paranormal romance, shifters, some romance, and mystery. I was so happy to get to revisit the Shifters world and I hope there are several more books in this series. Both of the leading characters were ones I was excited to see. Jace Hammond was one of my favorites so I was doing a happy dance when I saw he was the pack leader in this one! Abby has been dealing with traumatic events that happened years back that still affect her. It was nice to see how her character was years later. Though not required, I'd suggest you read the Shifter series before this series and I'd strongly recommend the novella I mentioned earlier since it's referred to several times. That being said, if you're a fan of the Shifters series, I think you'll love this spinoff!