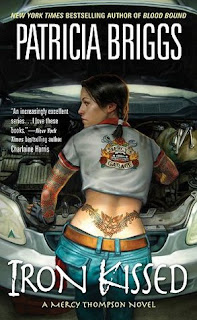 Iron Kissed is book three in the Mercy Thompson series. The series revolves around Mercy Thompson, a mechanic that is able to shift into a coyote. I've read a few of these books when they were released and couldn't remember why I stopped the series. I don't remember reading the next one in the series, so I guess I stopped on this one. I will mention right off the bat that if you hate books with any sort of rape in them, avoid this book.

In this installment, Mercy is called to the fae reservation to investigate some murders. I love that the series seems to be cycling through the paranormal characters. Book one was about the wolves, book two was the wolves and vampires, and book three is all about the fae. So for this book, someone is killing fae and their internal investigation turned up nothing. Mercy's coyote form can sniff out more than they can though so she notices a common element in all of the deceased's houses. She tells her friend Zee and the next thing she knows him and Uncle Mike, another member of the fae, are heading to the guy's house only to have Zee arrested for the guy's murder. Mercy knows he's innocent and will not rest until she figures out who is behind it and spring Zee from jail.

This book wasn't my favorite in the series and I think the rape scene was what caused me to quit being anxious for the next book and I then forgot to get it when it came out. The characters were interesting, most of the fae are dangerous and wild. Poor Mercy doesn't know how to stay out of trouble so that kept me on my toes since I wasn't quite sure who was pulling the strings for all the murders. On the love front, Mercy finally makes a decision between Adam and Samuel which I'm glad since it felt too much like a love triangle for my taste. All in all, this was a decent read, but I'm ready to get to the next book and see what happens. If you like Urban Fantasy with weres, vampires and fae I think you'll love this series.