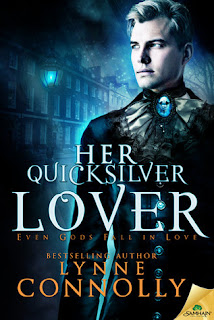 Love knows no bounds, and keeps no secrets.

Instead, she finds the club’s walls shield Roman gods in human form. One of which she must keep at arm’s length at all costs—the club’s alluring, enigmatic owner, Amidei, Comte d’Argento. Otherwise known as Mercury.

Joanna catches Amidei’s attention long before she drops and shatters an expensive tea caddy. He knows she’s spying, but he never suspected she’d be his nemesis in human form—or that she would stir his strongest protective instincts.

Those instincts will be tested to the limit when an enemy strikes from an unexpected corner, threatening their lives. And Amidei will have to face every last one of his fears to protect the woman he has come to love.

Why I am waiting:
What the heck you guys, how did I not know about this series?? It looks right up my alley!! Let me know if you've read any of the books in this series. I'm eyeballing book one now, looks like I have a bit of catching up to do lol