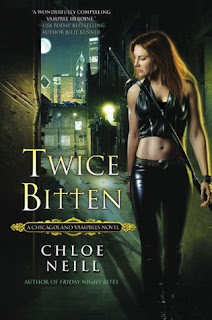 Twice Bitten is book 3 in the Chicagoland Vampires series. Caroline Merit aka Merit is getting the hang of being the Cadogan house sentinel. Her and the master vampire of Cadogan house, Ethan Sullivan are hanging out with the shapeshifters in this installment. That made me happy since I wanted to see more of the shapeshifters. They're playing bodyguards while protecting the Alpha, Gabriel Keene. The shapeshifters are trying to decide if they should stay in Chicago and not everyone is on board. At the meeting, someone starts shooting and Merit has to save the day before one of the shifters gets killed. Things can only get worse from there, and it really made for an interesting read with lots of action.

Twice Bitten was a pretty solid installment into the series. I think the shapeshifters will be playing a bigger role in the series later on (I hope so!). The vampires and shapeshifters have never really had a partnership in the past but I think there might be one in the near future. I was happy and then extremely frustrated with Ethan and Merit's relationship. Enough so that it pissed me off. Luckily there were a few appearances from the secondary characters that I've enjoyed so that was a good thing. I was mainly happy to see Merit and her BFF Mallory making up from issues in the previous book. I'll be interested to see what happens in book four, I'll have to grab the audiobook soon. If you're a fan of Urban Fantasy with vampires and shifters, I think you'll enjoy this series.