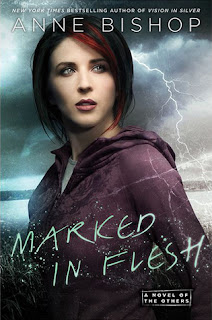 Marked in Flesh is book four in The Others series. The series revolves around Meg Corbyn and the terra indigene (wolves, crows, vampires etc) in the Lakeside Courtyard. As the books progress the world is expanding a bit and showing other Courtyards/towns and their characters. The common element in all of the towns is The Humans First and Last (HFL) movement. The HFL group has been progressively getting more prominent in the series. They're basically a human group that believes they deserve everything and the terra indigene are taking what belongs to them (land, water, etc). They're not afraid to attack the terra indigene in groups, or even set fire to human establishments that are friendly to the terra indigene. It's gotten bad and I knew it would finally reach a tipping point in this book, and I was right.

While the bulk of the story revolves around the HFL vs the terra indigene, we do get occasional flashes of the other cassandra sangue. I'm hoping the next book shows a bit more about them since I really do enjoy learning about them. Meg is still trying to figure out ways to make it easier on the other cassandra sangue to survive off the compounds. So far she's making a bit of headway, but I'll be interested in seeing how it goes. There's still no romance per se on the Meg and Simon front though there is something a bit unexpected between the two. I can't wait to get my hands on the next book to see if there will be romance. This series is so unique, and I think people fond of Urban Fantasy would love it. I highly suggest the audiobook version, the narrator rocks.