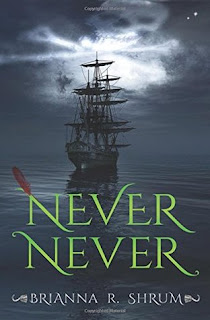 Never Never is a retelling of Peter Pan. The twist is that it's told in Hook's POV. It starts with Hook as a child in England, he meets Peter Pan and winds up going with him to Neverland with the promise that he could go back anytime he wanted to. Time goes by quickly and Hook seems to be having fun while creating mischief with the Lost Boys. But things turn bad when Hook starts to grow older against Peter's wishes and he's cast out of the Lost Boys and left to join the pirates at the Spanish Main ship. The story continues from there with Hook growing into a man and being the captain of the Spanish Main.

I had issues while reading this book and almost gave up halfway through. I'm a huge fan of retellings and always willing to give one a try. This one just wasn't quite for me I think. Do I think someone else will love it? Yes! It just wasn't for me. I honestly kept hoping that Peter Pan would die, he was a huge jerk in this book. If you enjoy YA retellings, and are a fan of Peter Pan's story I think you might enjoy this one even though Peter Pan is a huge jerk.