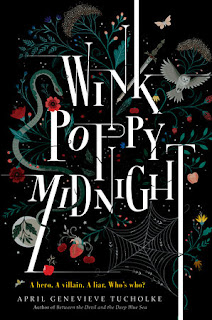 Wink Poppy Midnight is one of the most unique books I've ever read. As the cover states, there's a hero, a villain and a liar in this book and you have to figure out which character is which. And as you can guess from the title, the story revolves around three main characters, Wink, Poppy, and Midnight. We cycle through each character's POV and get each side of the story as it progresses. All of the characters are fascinating in their own way and the POV is labeled so you know who is who. Though I think you'd be able to tell quite quickly since each character is so different.

Wink is eccentric and I couldn't really pin her down. Her entire family is odd, and the mom lets the children do as they please. She lives next to the house that Midnight just moved into. She's constantly blurring reality with things from the adventure books she reads.

Poppy is the picture perfect beauty that gets her way all the time but has a wicked heart. She's a bad person, we know that from page one where she cut off a schoolmate's hair because she wanted to. It left me questioning if she was the villain from the start.

Midnight just moved into a creaky old house with his Dad. His mother and brother moved away so he's a bit broken and lonely. It doesn't help that his love interest (Poppy) doesn't care for him at all and just strings him along when she feels like getting attention. He was my favorite character, mostly because I was hoping he'd be able to get from under Poppy's thumb and find happiness.

Unique, enthralling, and full of twists and turns, Wink Poppy Midnight is a must read. I wasn't sure where the book would take me when I first started, but it wraps up nicely and we figure out which character is the hero, villain, and liar by the end. I can't really say more without giving away some of the mystery so I think I'll leave it at that. Just know the book kept me on my toes and wondering what would happen next. I recommend Wink Poppy Midnight if you're looking for a unique YA.