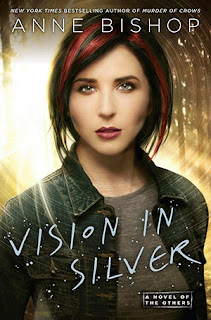 Vision in Silver is book three in The Others series. Meg Corbyn and the gang of terra indigene (wolves, crows, vampires etc) are back and dealing with the Humans First and Last (HFL) movement. This time around the HFL has really stepped up its presence and humans are becoming even more hostile to the terra indigene. It's even affecting the Lakeside Courtyard which has the most human integration compared to the other courtyards. If that isn't enough on Meg and Simon's plate, they're also helping with the other cassandra sangue (blood prophets) that were released from the compounds. Meg and her "human pack" are trying to come up with ways to help lessen the culture shock the blood prophets face when experiencing new things. Meg is still learning how to deal with the world herself, so it was interesting learning things along with her. The bulk of the book is building up the HFL issues with the terra indigene and I know it will play a larger part in book four.

I adore this series, it's so unique and addicting. It's still lacking in the romance aspect though there is tension between Meg and Simon Wolfgard. I keep hoping something will happen but the duo continues to grow closer as friends but with a dash of romantic confusion mixed in. I'll hope the next book has a hint of a relationship, but I won't hold my breath. If you haven't read this series yet I highly suggest it if you're a fan of Urban Fantasy. It is so different from anything out there that I've read before, but oh so enjoyable!