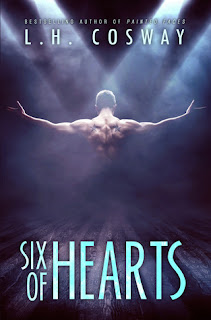 Six of Hearts is book one in the Hearts series. Matilda, our leading lady is working at her father's law office when a hot guy walks in for a consultation. After talking with him a little bit, Matilda's father winds up not taking Jay's slander case. Though their paths don't end there, in a turn of events, Jay is looking for a new place to live so he winds up as their tenant. Matilda and Jay quickly become friends and I could instantly see the spark between the two. Jay is oh so protective over the slightly naive Matilda and a bit possessive as well. The duo quickly becomes inseparable and the lines blur and romance blossoms.

Jay's character was a man after my heart. He's an illusionist which is a character I haven't read about before. He has some tricks up his sleeve and won't do a big reveal until later, so he kept me intrigued. And as I already mentioned the possessive and protectiveness he showed melted my heart. The story was written quite well and it was fleshed out nicely. I started this book and got addicted to Jay's character and had a hard time putting the book down. I know I grabbed this as a freebie and wound up falling in love with the author's writing. If you like contemporary romance books with your man protective I highly suggest you read this one.