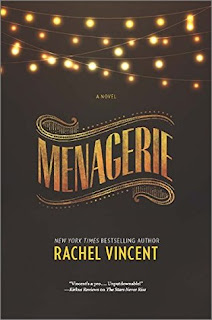 Delilah Marlow is out celebrating her birthday with her friends and boyfriend when her life changed. Her boyfriend knows of her fascination with the cryptid so he got tickets for Metzger's Menagerie, which is basically a carnival/circus with cryptid beings. Cryptids are the mythological beings we've all heard of ranging from phoenixes, mermaids, centaurs, and sirens to name just a few. While her boyfriend was right, Delilah is fascinated with the cryptids, he didn't think about the fact that our leading lady is sympathetic towards them. So when she sees one of the handlers mistreating a little wolf girl, something changes inside her. She snaps and somehow unleashes a power that she's never had before and kills the handler. That seals Delilah's fate, and she winds up being stripped of all her humane rights. She's sold to Metzger's Menagerie and expected to sit in a cage and give performances of her newfound abilities in each little town they stop at.

Menagerie is dark, gritty and mesmerizing. I really didn't want to put the book down because I just kept hoping that things would somehow work out. As I said, this book is dark, do not read this if you aren't a fan of darker stories. The cryptids are pretty much slaves, they're sometimes tortured, starved or even sexually coerced. It's not a pretty story and it does address how people treat others. I'll be interested in seeing what happens in book two, hopefully, Delilah manages to get a happy ending. I recommend this for Urban Fantasy fans that enjoy darker reads.