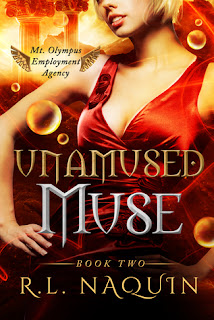 I've been eagerly awaiting book two in the Mt. Olympus Employment Agency series by R. L. Naquin. I was so happy to see it released, and started reading it immediately. The series is about a girl named Wynter Greene who hits bottom and then winds up working at Mt. Olympus Employment Agency as a Muse. At the end of book one, Wynter Greene is sent to Hades for six weeks and I knew there would be shenanigans there.

Wynter is filling in for a gal on maternity leave and is basically a personal assistant to Hades. She runs the occasional odd task for him, some of which were amusing, like walking the three-headed dogs, or helping out with the book club meetings which I loved. Then we have the rest of the job which is normal things like answering the phones.

While this is a fun installment I was so happy to see a little more background on Wynter and her mother. This installment really fleshed out Wynter's background and did so beautifully. Another thing I was really happy to see was more face time with the Gods, book one we got to meet one or two, but I wanted more and I got it. I'm excited to see where this series goes, and can't wait for book three. All in all this series is a must-read if you're a fan of Urban Fantasy or mythology.