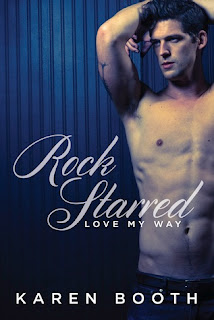 I've chatted with Karen Booth for awhile now but hadn't ever gotten around to reading her books. She's awesome, and I know now her writing is great too! In Rock Starred our leading lady, Kate Stillman is a talented photographer that snaps pictures of famous bands. One of the band members, Peter Barrett, is flirting hardcore with her and you can tell he's really interested, but Kate is hesitant. You see, she was engaged to a guy not too long before then and he was a jerk, it didn't end well. It's caused Kate to not trust men, and not get into any relationship or anything with strings attached.

A bit of time passes and Kate and a girlfriend decide to have a girls weekend. They hit the road and decide to pamper themselves in Miami. They get there, they're having fun and imagine Kate's surprise when she realizes the hottie from the band has a show in that town and he spots her while they're out and about. I feel like in quite a few rock star books the guy doesn't have to work all that hard to get the girl. But in Rock Starred, Peter is wooing Kate as best he can, and she's slowly letting him in. I enjoyed the change of pace, and I really loved Peter's character.

Rock Starred is an enjoyable novella that had me wishing for a rock star of my own. I enjoyed KBooth's writing style and already know I'll be picking up another of her books in the near future. She wrote the characters realistic and Peter was such a sweetie. I recommend this for any rock star lover out there.