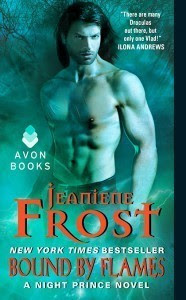 Bound by Flames is book three in the Night Prince series. This time around, Vlad and Leila are on the hunt for their enemy, Szilagyi. I feel like we get to know Vlad a little bit better this time around. He's always been very guarded but we get to glimpse bits of him we haven't seen before. Anyway, since Vlad's looking for his enemy of old, Leila is staying in the castle so she's not in danger's path. Things quickly get out of hand and the book gets dark, very dark. There are graphic scenes that I know will bother some readers, so know that going in. Extreme violence and torture to name a few. That being said I think JFrost wrote the content very well.

Overall, I'm really loving the Night Prince series, and I'm so glad to see this isn't the final book. Book four, Into the Fire, should be released later this year. I strongly urge you to read these books in order, since it won't make much sense otherwise. I recommend this series if you like vampire paranormal romance / urban fantasy.

Narrator:
Tavia Gilbert continued to rock it in this installment. She handled the characters emotions very well. I need to check out more books she's narrated!