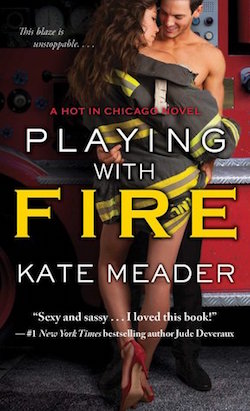 When a drunken billionaire crashes his car and insults Alexandra Dempsey’s family, her brother’s lifestyle, and her ability at her job, she tears his supercar a new one using the jaws of life. The viral video of her performance earns her the title of America’s Favorite Firefighter and the ire of Chicago’s Mayor, Eli Cooper—one of People’s Sexiest Men Alive two years in a row. Each time Alex is dragged onto Eli’s carpet, he treats her like a wayward child who needs a spanking and a time out. If only he didn’t stare at her like she was the farthest thing from a child.

Alex can’t stand the honorable Mr. Mayor and his chauvinistic views on women. How could the women of Chicago have voted him into office? How could she have voted him in? It hadn’t been his gorgeous looks only, though that was a large part. Eli traded on his military service record—being captured by a foreign enemy did wonders for a political career—and his father’s untouchable legacy didn’t hurt. But faced with Eli’s outdated opinions on women in the workplace, all Alex wants to do is let him burn.

That is until he runs back into a flaming building to save his ex-wife. Idiot almost got himself killed and Alex had no choice but to save him with her own oxygen. But just who saved who? He claims it was her but she blacked out and didn’t remember bringing him to safety. All she knows is the media loves it when they bicker on camera, so much so that Eli persuades her to help him win the reelection with a healthy bit of fake dating. Cue off the charts sexual tension!

Secrets come out, hearts and egos are wounded, characters grow and sexy times abound. In some stories, they say setting is a character but in Meader’s Hot in Chicago, sexual tension serves as an MMA fighter, round-house kicking its way through reluctant characters for a page-turning powerhouse of romantic marvelousness.

So if you like your heroes on the right side of asshole (eventually) and the heroines who put them there, grab Playing with Fire.