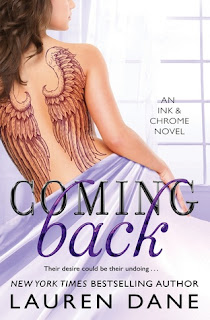 Jessilyn (aka Jessi) Franklin returns to Seattle after being away for 5 years. Her ex, Mick Roberts sent her an invitation to Twisted Steel's party and that's where our story begins. Jessi has never gotten over Mick and Adam. You see, they had a m/f/m relationship going on and when Mick split town the relationship crumbled. Now that they're all back in the same town, they're going to see if they can make it work again.

Coming Back is a second chance type book. Each of the characters has their own issues and they have to make it work if they want their relationship to succeed. If they weren't working on their relationship woes of the past, they were in the bedroom. There are a lot of steamy scenes between the three characters and while I do love some well-written smut I felt the story lacked in other parts. There was the occasional scene of Jessi working on sewing costumes, or hanging out with Jessi's parents, but they were few and far between.

The characters were where I fell in love with the book. Jessi was a free spirit that is very artistic. She can take care of herself, but her men take good care of her. Jessi's character is well balanced with her two men, damaged though they are. Adam was a delicious alpha male that liked to be in charge. Mick is damaged but close to finding his way back to who he wants to be.

Though this story is quite different from book two, I really fell in love with LDane's writing and can't wait for the next book. I will note that there was some bondage and some m/m scenes so if that isn't your cup of tea, I'd avoid this installment in the series. I'd recommend this book if you're a fan of m/f/m and second chance books!