Target Engaged - M. L. Buchman
Kyle Reeves was trained by his father to do one thing: be the very best. So he isn't daunted by the Delta Force selection process—the toughest military training on earth—or when the very best woman falls into his arms.

Carla Anderson buried her heart in Arlington when she lost her mother and brother to combat. She wants nothing more than to give her all in the line of duty until she too is laid down beside them, and Delta training might just be the challenge she's looking for. Little did she know, the true challenge was coming in the shape of a sexy, alpha-male military operative.

Surviving brutal training is just the beginning of the merciless path to Delta, but it's also the dawn of the hottest passion Kyle and Carla have ever known…

Make Me Stay - Jaci Burton
The fifth novel of heartwarming passion in the Hope series, from the New York Times bestselling author of the Play-By-Play. Perfect for fans of Jill Shalvis, Rachel Gibson and Bella Andre.

Reid McCormack is back in Hope to renovate the old mercantile. Then he plans to go back to Boston, where he's built a successful career. But beautiful florist Samantha Reasor is a distraction Reid hadn't counted on. Samantha intends to convince Reid that Hope is where his heart has always been, and coming home might be the best choice he could ever make.

Working for Zach Montgomery is challenging on many levels-coming from a wealthy and powerful family, he lives by his own rules and doesn't answer to anyone. But Gabriella Martine has no intention of backing down. She's used to handling stubborn men, and it doesn't hurt that Zach is smart, charismatic… and gorgeous.

And a Heart for Adventure

Zach's perfect world is turned upside down when a climbing accident leaves him broken, angry, and maddeningly dependent. In his slow quest for recovery, Gabriella is always there to help… but as Zach comes to see his beautiful assistant in a new light, he is forced to re-evaluate what it really means to be aman worthy of Gabriella's love.

Sweet Ruin - Kresley Cole
Mesmerized by a beautiful supernatural creature unlike any he’s ever met, an immortal assassin is caught between desire and duty in this sizzling new novel from Kresley Cole’s #1 New York Times bestselling Immortals After Dark series, which RT Book Reviews declared “should be on your auto-buy list!”

A foundling raised in a world of humans

Growing up, orphaned Josephine didn’t know who or what she was—just that she was “bad,” an outcast with strange powers. Her baby brother Thaddeus was as perfect as she was flawed; protecting him became her entire life. The day he was taken away began Jo’s transition from angry girl…to would-be superhero…to enchanting, ruthless villain.

A lethally sensual enforcer on a mission

A threat to the Møriør has brought archer Rune the Baneblood to the mortal realm to slay the oldest living Valkyrie. Whether by bow or in bed, he never fails to eliminate his target. Yet before he can strike, he encounters a vampiric creature whose beauty conceals a black heart. With one bite, she pierces him with aching pleasure, taking his forbidden blood—and jeopardizing the secrets of his brethren.

A boundless passion that will lead to sweet ruin…

Could this exquisite female be a spy sent by the very Valkyrie he hunts? Rune knows he must not trust Josephine, yet he’s unable to turn her away. Despite his millennia of sexual conquests, he can’t ignore the unfamiliar longing she arouses deep within him. When Jo betrays the identity of the one man she will die to protect, she and Rune become locked in a treacherous battle of wills that pits ultimate loyalty against unbridled lust. 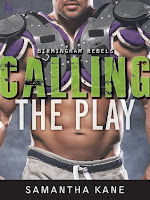 Calling the Play - Samantha Kane
Samantha Kane’s Birmingham Rebels series—perfect for fans of Shayla Black and Lexi Blake—proves that three’s never a crowd . . . at least not for the hard-bodied football all-stars who give teamwork a sexy twist.

Quarterback Tyler Oakes plays hard and parties even harder. That reckless lifestyle nearly derailed his career, and now the Birmingham Rebels are Ty’s last shot at football immortality. But staying out of trouble can take its toll—especially for a man with a taste for girls and guys. Because curvy, gorgeous Randi McInish is just the kind of trouble he’d like to get into.

A tough-as-nails undercover cop, Randi meets her match in Ty. After they get wrapped up together in a drug bust and a high-speed car chase, Randi’s eager to take the notorious bad boy for another wild ride. Turns out Ty already has something in mind. When he introduces her to the Rebels’ sexy new quarterback coach, things start heating up a little too fast for Randi.

Brian Mason coached Ty in college, and boy do they have history together. With Brian taking control on the field and in the bedroom, they were an unstoppable team. But Brian, blindsided by love, ran from his feelings for Ty. He won’t let Randi make the same mistake. Both men agree they need more than each other. They want a woman they can share. And when they make a pleasure play for Randi, all three are sure to score.

Calling the Play is intended for mature audiences.

Take one deadly bite and, bam, a man’s life is changed forever, or so Caleb discovers when a loss of control leads to him joining the military and leaving everything behind.

Time goes by … years spent silent and alone, cut off from those he loves. Until it’s time to come back, a scarred veteran, in many ways broken and looking for a meaning to his life. Perhaps it's not too late to right some wrongs. Make amends. Kiss a certain pair of sweet lips one more time.

If only Renny would damned well let him.

It doesn’t take Caleb long to realize Renny’s just the thing this croc needs to bring him back to life. Yet, what if he loses control again? He doesn’t want to take nibbling on her thighs to a whole new level.

Too bad, he can’t stay away, especially not when he discovers her secret. Add in a strange creature stalking the townsfolk and there is no way he’s leaving her alone.

Years ago it just about killed him to leave, but Caleb’s a changed man now. A darker kind of animal, and this retired soldier is ready to kill so he can stay.

Welcome to Bitten Point, where the swamp doesn't just keep its secrets, it sometimes eats them.

Everyone knows that. I knew it intimately as everyone in my life died thanks to my one seemingly harmless mistake. I'd brought down Heaven, lifted up Hell, and set the world on fire, all due to one slip of the memory.

I forgot the pizzas...

Caliban is a dead man. The Vigil, a group devoted to concealing the paranormal from humanity, has decided Cal has stepped out of the shadows once too often, and death is the only sentence. They plan to send a supernatural assassin into the past to take down the younger, less lethal Cal.

But things change when The Vigil makes one last attempt on Caliban's life in the present—and end up destroying everyone and everything he cares about.

Now, Cal has to save himself, warn those closest to him, and kill every Vigil bastard who stole his world. But if he fails, he and everyone in his life will be history…

In The Company Of Wolves - Paige Tyler
There’s a new gang of criminals in town and it’s organized, ruthless, and, most importantly, a pack of wolf shifters. Eric Becker and his Dallas SWAT Team are determined to rid their streets of these lowlifes, but when his fellow cops collide with the criminals in a shoot-out, he finds himself face–to-face with the most beautiful woman he’s ever seen.

Incapable of shooting or arresting the alluring shifter who’s stolen his heart, Becker decides to hide her and leave the scene with the rest of his team. Now Jayna, his mystery woman, is left not only wondering why she was protected, but also what a street-savvy thief like her is going to do with a hot alpha wolf officer like him…

Paradise, blooded daughter of the king’s First Advisor, is ready to break free from the restrictive life of an aristocratic female. Her strategy? Join the Black Dagger Brotherhood’s training center program and learn to fight for herself, think for herself…be herself. It’s a good plan, until everything goes wrong. The schooling is unfathomably difficult, the other recruits feel more like enemies than allies, and it’s very clear that the Brother in charge, Butch O’Neal, a.k.a. the Dhestroyer, is having serious problems in his own life.