The enigmatic Hancock has been both opponent and ally to the KGI teams for as long as they've known him. Always working a deep game, Hancock's true allegiance has never been apparent, but one thing is for certain—he never lets anything get in the way of duty.

But now, his absolute belief in the primacy of his ultimate goal is challenged by a captive he's been ordered to guard, no matter how much she suffers in her prison. She's the only woman who's ever managed to penetrate the rigid walls surrounding his icy heart, but will he allow his perplexing feelings for the beautiful victim to destroy a mission he's spent years working to complete or will he be forced to sacrifice her for “the greater good.”

Solving the infamous Chopper case has helped crime scene physician Dr. Eliza Jekyll establish her fledgling career in the chauvinistic world of Victorian law enforcement. But the scrutiny that comes with her newfound fame is unwelcome for a woman with a diabolical secret. And there is the mercurial Royal Society agent and wolf man Remy Lafayette. Does he want to marry her, eat her, or burn her at the stake? Though Eliza is uncertain about Remy, her dark and jealous shadow self, Lizzie, wants to steal the magnetic and persistent agent, and usurp Eliza’s life.

It’s impossible to push Remy away when he tempts her with the one thing she can’t resist: a bizarre crime. The search for a bloodthirsty ritual torturer dubbed the Pentacle Killer draws them into a terrifying world of spies, art thieves, and evil alchemy, where the price of immortality is madness?or damnation—and only Lizzie’s dark ingenuity can help Eliza survive.

As Eliza and Remy race to thwart a foul conspiracy involving the sorcerous French, they must also overcome a sinister enemy who is all too close: the vengeful Lizzie, determined to dispose of Eliza for good.

Shattered - Cynthia Eden
In New York Times bestselling author Cynthia Eden's latest novel featuring the Last Option Search Team (LOST), one agent is forced to face her past as she uncovers secrets about the man who may be the key to her future.

Criminal psychologist Dr. Sarah Jacobs is all too familiar with the kind of bad boys who belong behind bars. But the dark, dangerous man she meets in the New Orleans underworld is a new kind of ruthless, and all too irresistible.

Jax Fontaine doesn't claim to be a good guy, but he's loyal to his own code and brutally honest about what he wants. He and Sarah may be worlds apart, but when they're skin to skin, nothing matters but the heat between them.

And when a deranged killer targets Sarah, Jax will do whatever it takes to keep her safe.

As a thief, I stick to the shadows as much as possible. But when the head of the Sinclair Family picks me to compete in the Tournament of Blades, there's no escaping the spotlight—or the danger.

Even though he's my competition, Devon Sinclair thinks I have the best shot at winning what's supposed to be a friendly contest. But when the competitors start having mysterious "accidents," it looks like someone will do anything to win—no matter who they hurt.

As if I didn't have enough to worry about, mobster Victor Draconi is plotting against Devon and the rest of my friends, and someone's going around Cloudburst Falls murdering monsters. One thing's for sure. Sometimes, humans can be more monstrous than anything else...

Fifteen years ago, I ran away from Whisper Hollow, Washington, a small town on Crescent Lake in the Olympic Peninsula. But truth is, if you were born here, you can never really leave. I’m Kerris Fellwater, and when I returned, I inherited my grandmother’s house—and her gift. As a spirit shaman, it’s my responsibility to drive the dead back to their graves, because around Whisper Hollow, people—and secrets—don’t always stay buried.

When I was little, I was told my mother ran off. But now it looks like she was murdered. With the help of my mysterious neighbor Bryan, we begin to unravel the mystery of her disappearance, and in doing so, unearth a dark force seeking to bury Whisper Hollow. Now I must work with the dead, rather than against them, because our enemy will do whatever she can to destroy the town, and she means to start with me.

The Single Undead Moms Club - Molly Harper
In the next book in Molly Harper’s Half Moon Hollow paranormal romance series, Libby (a widow-turned-vampire) struggles with her transition, and finds out it sucks to be the only vampire member of the PTA…

Widow Libby Stratton arranged to be turned into a vampire after she was diagnosed with late-stage cancer. It wasn’t the best idea she’s ever had, but she was desperate—she’s not about to leave her seven-year-old son to be raised by her rigid, overbearing in-laws.

On top of post-turning transition issues, like being ignored at PTA meetings and other mothers rejecting her son’s invitations for sleepovers, Libby must deal with her father-in-law’s attempts to declare her an unfit mother, her growing feelings for Wade—a tattooed redneck single dad she met while hiding in a closet at Back to School Night—and the return of her sire, who hasn’t stopped thinking about brave, snarky Libby since he turned her.

With the help of her new vampire circle, Libby negotiates this unfamiliar quagmire of legal troubles, parental duties, relationships, and, as always in Harper’s distinct, comedic novels, “characters you can’t help but fall in love with” (RT Book Reviews).

The Iron Warrior - Julie Kagawa
The Iron Prince—my nephew—betrayed us all.

Waking after a month on the brink of death, Ethan Chase is stunned to learn that the Veil that conceals the fey from human sight was temporarily torn away. Although humankind's glimpse of the world of Faery lasted just a brief moment, the human world has been cast into chaos, and the emotion and glamour produced by fear and wonder has renewed the tremendous power of the Forgotten Queen. Now, she is at the forefront of an uprising against the courts of Summer and Winter—a reckoning that will have cataclysmic effects on the Nevernever.

Leading the Lady's Forgotten Army is Keirran himself: Ethan's nephew, and the traitor son of the Iron Queen, Meghan Chase.To stop Keirran, Ethan must disobey his sister once again as he and his girlfriend, Kenzie, search for answers long forgotten. In the face of unprecedented evil and unfathomable power, Ethan's enemies must become his allies, and the world of the fey will be changed forevermore. 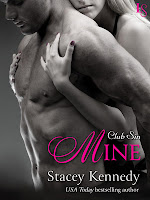 Mine - Stacey Kennedy
Dmitri and Presley—the scorching-hot couple who started it all in the USA Today bestseller Claimed—return to save Club Sin in the exhilarating new short novel from Stacey Kennedy.

Before she met Dmitri, Presley never imagined she would find a Master who could deliver on all her hottest fantasies. Dmitri’s love and his sensual artistry surprise her every day, until he suddenly turns distant and cold. For the first time, Presley wonders where Dmitri’s heart truly lies: with her, or with Club Sin. As the life they’ve built together begins to crumble, Presley can only trust that Dmitri has what it takes—to defend what’s his, and win back the woman he cannot live without.

Mine is intended for mature audiences.

Haunt Couture and Ghosts Galore - Rose Pressey
This looks like a job for the fashion police!

A hot-ticket charity fashion show is the perfect chance for Cookie Chanel, proud owner of It's Vintage Y'All, to show off her stylistic savvy for a good cause. But when a famous fashionista is fatally flattened, and the ghost of a former private investigator asks for Cookie's help, she has to scurry to sew up a solution. With clever clues from Wind Song, her psychic cat, and sassy suggestions from Charlotte, her ghost-in-residence, Cookie must unravel the sinister stitches of a deadly design--before she becomes the next fashion victim...