Review: The Witch With No Name 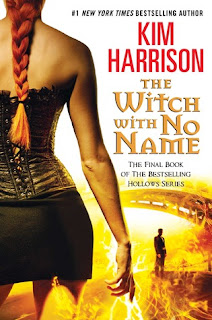 The Witch With No Name is book 13 of The Hollows series. It is the final book in a series I didn't want to end. In this installment, Rachel is pretty much an outcast, not including her relationship with her friends. Al, her demon mentor isn't pleased with her from the previous book's drama. The elves aren't happy that she's with Trent. The vampires on the other hand are forcing her to figure out how to capture their souls and put it back in their bodies, or else.

This isn't an easy book for Rachel, and I kept hoping things would work out so the series would end on a happy note. Rachel's character has grown throughout the series, and though she still gets herself into troubling situations, she knows how to handle herself. I'm trying not to do spoilers in case there are others like me that hadn't read the book a year after release. I will say the story wraps up nicely and I really enjoyed that I got to see a glimpse of years later and how the characters are doing. While I'm sad to see the series go, it was a great series and one that got me addicted to the Urban Fantasy genre. I highly recommend the series if you want to be immersed in a rich paranormal world.