Review: On the Edge 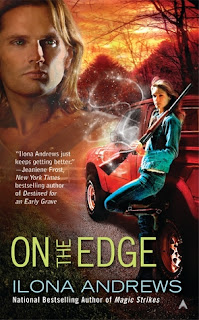 I felt kind of bad for Rose's character. She is the adult figure for her two brother's and money is super tight for the family. Rose's younger brother's were left in her care when their father took off to chase his dreams. Rose had luckily finished school by that time, but she had managed to paint a target on her head. In the Edge, when you graduate you show off your flash (think magic lightening bolt) to see who has the most power and control. Well, Rose decided to show everyone that she was able to flash white, only a thing the Bluebloods, the strongest magic users are able to do. People then tried to entice her to become their mistress/baby maker just to get her power in their family tree.

So when a hunky blueblood starts coming around her home, Rose is not a happy camper. She has to put her feelings aside when some magical creatures are loose in the Edge and going after any sort of magic. Declan Camarine, the blueblood from the Weird was an interesting character. He's a hottie, knows his way around weapons, oh and he's rich. What more could a gal want, right? I wasn't all that surprised to see Rose not wanting anything to do with him though.

I'm a really big fan of IAndrews's work at this point. Each book I've read by them, I've enjoyed. There's always that balance of fighting, romance and whodunit. Though their lead female characters do have some similarities throughout their different series, I manage to love each series! I highly suggest all of IAndrews's books, if you like a strong magical female lead in your Urban Fantasy.