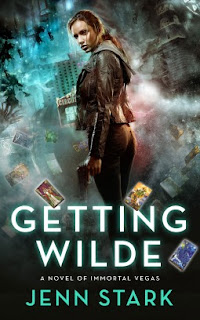 I loved the element of the Arcana Council. Some of the major players in a Tarot deck were present, and I was intrigued to see how they would be portrayed. It felt like the Tarot cards were researched well and the author formed characters with the traits each card represents. The Devil's character was interesting, I'm hoping to see more of him in future installments.

My favorite was probably the Magician. He's the one that has a history with Sara, both professionally and personally. Personally, Sara is hesitant around him, but I think they'll wind up together later on in the series. Professionally, The Magician steps in for the rescue a few times because Sara got herself in a tight spot. I will say her recklessness had me wondering how she's still alive and running everywhere for magical artifacts.

Getting Wilde is a magical, action packed read. I enjoyed the book, it brought elements I haven't seen into the genre before. I'll be interested to see what happens in book two. I recommend this if you like a treasure hunter in your Urban Fantasy.