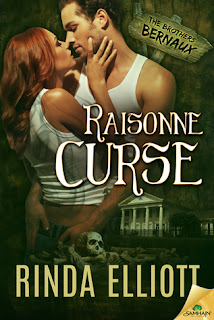 Elita Raisonne's family is plagued by a curse. It's been passed down from generation to generation only singling out the women. Elita's relative rejected a man way back when and he put a hex on her and her family. Elita has come back to her home town and things are only getting worse so they suggest she go see the Bernaux brothers. Rumor has it that they're able to break hexes, and it's the only chance she has.

Raisonne Curse was a steamy story that I couldn't put down. I know this will bother a few of you, so I'll mention it even though it didn't bother me. The story takes place within a few days, definitely less than a weeks time. That being said, love was present within that short period of time. The characters were drawn to one another from the start and it grew throughout the story. I wouldn't necessary call it instalove since it grew throughout the story, but it still might bother some. I enjoyed the characters, and hope the next few books will be about the other brothers! I suggest this story if you're looking for a steamy trip to Louisiana.