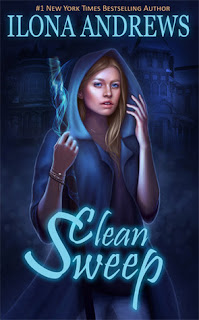 Dina Demille, an Innkeeper, runs a bed and breakfast in Texas. She's not what you'd think of when you hear Innkeeper though. You see, in this world, there are special inns for non-humans. Those inns are run by Innkeepers, which have magical powers. Their sole duty is to protect the inn and its patrons. Dina's character is pretty awesome and I really enjoyed hearing her story. She has a magic broom that can sprout blades on command, and an attack Shih Tzu named Beast. She's not your typical Urban Fantasy character and definitely not one to be trifled with.

So when something is killing dogs in her neighborhood, she knows something is amiss. Cornering a local werewolf (Sean Evans), she tells him to take care of the issue or she will. You know things are never that easy though. Sean and Dina partner up when they realize there is something more than meets the eye with the monsters attacking the local animals. The monsters are pissed and coming out of the woodwork in force and seeming to target Dina. Dina and Sean have to find who is behind it before the little town they call home is destroyed and her cover is blown.

I really enjoyed listening to Clean Sweep. It has the same narrator as the Kate Daniels series so I'm very familiar with her work. I thought I might have a hard time since I'm used to hearing Renee Raudman as Kate, but it went smoothly. I'm fairly certain my lust for Ilona Andrews's writing has not been missed by most of yall. I highly suggest ALL of their books if you haven't read them yet. I think I'll be reading The Edge series next. If you're looking for a unique Urban Fantasy I hope you pick this one up!