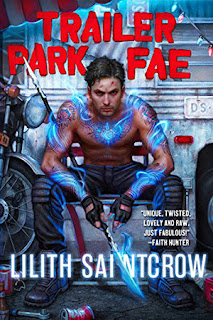 Jeremy Gallow, a half human/half fae is in the mortal world working as a construction worker. He turned away from the fae when he married a human woman and decided to live a normal mortal life with her. Unfortunately, after awhile together, she died in a car accident and he's left to continue living his life like he had been, though filled with sorrow. So when a fae girl walks into the bar that he's having drinks with his coworkers at and she looks uncannily like his dead wife, he gets up and follows her. This starts the journey of Gallow and Robin.

You see, Robin is the fae queen of Summer's errand girl. In their world, the fae are getting a plague like illness that affects the fae that are more pure blooded. It's not effecting the half bloods or less quite as badly. Robin is sent to get a cure from one of Summer's human playthings in the mortal world. On the way, Unwinter's minions cause issues and that's when Gallow steps in to help his dead wife's lookalike. This continues on until the end of the book. There are discoveries along the way, but I'll leave that quiet in case you want to read this book.

I will however mention a few things if you are planning on reading the book. I had several issues as I was reading and feel like I should just put this out there. It quickly changes both of the main character's names depending on who is speaking. Gallow is known as Jeremy, Jeremiah, as well as Gallow. Robin is called Robin, or Ragged. Initially both of these character name changing so often confused me, until I figured out some random guy didn't just show up, it was still Gallow. Secondly, it's extremely slow at the beginning. I'm not sure if that was just an issue for myself, or it others will have this issue as well. I had trouble until about the 25% mark, then it got a bit interesting and at the 75% mark I was fully invested in the story. My last complaint is that Gallow's dead wife is mentioned a bit too much as well. I understand that having a girl that looks just like her will bring up the subject, but I felt it was mentioned almost every few pages.

All that being said, there were positive things about the book as well. The fae had me intrigued, and I hope for the characters to spend a bit more time there vs on the human side in the next book. I liked Robin's character, and her powers intrigued me. And I seem to have a weakness for the nonstop running until we work everything out type books. So all that being said, I did enjoy Trailer Park Fae, but had a difficult time getting into it. I would however read book two just to see what happens next. I'd suggest this if you like dark fae books.