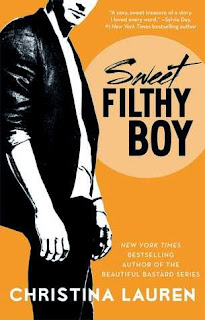 Mia Holland, a new college graduate is off to celebrate her graduation with her two BFF's in Vegas. This lovely trio of women quickly won me over, and I knew I would enjoy the book. A little back story, Mia's a little bit damaged on the inside after an accident ruined her dreams of being a dancer. So she's doing whatever her father wants, which is to go back to college and get a degree in business. She just graduated but he wants her to get a higher level of degree. With that being said, I'm glad Mia was able to cut loose with her girls for a weekend, you can clearly tell she needed it. So the girls are out at a bar celebrating and dancing Mia locks eyes with a hottie. Later that night some rowdy people across the hall are keeping her up, so she goes to tell them off when lo and behold, it's the hottie from the bar and his two friends. It's a little bit like fate intervened for these groups of friends.

Three girls and three guys in Vegas drinking heavily is a mixture for trouble. Mia and Ansel (the sexy guy from the bar) wake up after partying hard the night before to find out everyone in their group has paired up and gotten married. Ansel, being the sweet guy he is, decides to invite Mia to go back to France with him to get to know one another better and see if things would work out. There is a spark between the two, so I wasn't too deterred by the idea. The others quickly get annulments. Not knowing what to do Mia has to decide if she should take a chance on the French hottie, or if she should follow the straight and narrow path that her father has laid before her.

I wasn't at all surprised when Mia decides to rebel and go off to France with her new hubby. We learn he's a lawyer, working on a prestigious case. Which means he isn't home much. So Mia is left in his home, alone for the majority of the day and night and she's in a country that she doesn't speak the language. You know there are bumps in the road for the couple. I felt bad for her situation, but I wound up being impressed with her character. Instead of wallowing in the place by herself, she explores and manages to find herself. She's not the person that blindly does her father's bidding. If she wants to go back to college for business then she has the ability to make that decision.

Sweet Filthy Boy is everything I could hope for in a romance. He whisks her off her feet and while there are issues between the two, they try to make it work. I really enjoyed the book and I'm loving the series so far. I might have already marathon read book two since I enjoyed this one so much. I'd suggest picking up both if you're interested since I wound up reading them back to back. Enjoy!