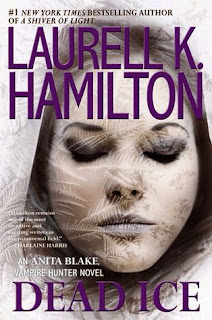 Anita Blake has the highest kill count of any vampire executioner in the country. She’s a U.S. Marshal who can raise zombies with the best of them. But ever since she and master vampire Jean-Claude went public with their engagement, all she is to anyone and everyone is Jean-Claude’s fiancée.

It’s wreaking havoc with her reputation as a hard ass—to some extent. Luckily, in professional circles, she’s still the go-to expert for zombie issues. And right now, the FBI is having one hell of a zombie issue.

It’s the sort of case that can leave a mark on a person. And Anita’s own soul may not survive unscathed.

Why I am waiting:
I remember when I started this series, I really enjoyed it. I haven't read several of the latest books, because I felt the series has changed so much. I'm hoping it goes back to its roots, but I doubt. Until then I'll keep eagerly awaiting it so I can see reviews.
Posted by LilyElement at 12:00 AM