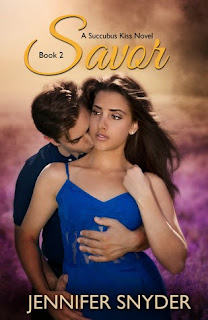 Succubus Kenna Blake has been infected by a wraith…

The infection is just the beginning. As the wraith slowly gains control, Kenna must fight to keep a firm hold on her succubus nature, before she disappears completely.

Following the only clue her mother has to offer, she tracks down the infamous Luke Bloom, owner of Love Potion #9, hoping for the answers she desperately needs. Unfortunately, Luke doesn’t harbor the magic that could rid her of the wraith and save Kenna’s soul…but his twin sister, Lexy does.
The problem: Lexy Bloom relinquished her magic five years ago and went into hiding.
As Kenna finds herself plagued by nightmares created by the wraith, she vows to do whatever necessary to rid herself of its darkness. Until she learns her only escape comes in the form of a rare spell requiring a shocking cost…

Kenna Blake returns in book two of the Succubus Kiss series. As you can guess from the series name, Kenna is a succubus. Book one left off where Kenna was infected with a wraith. It's pretty much trying to take control of her and will quickly kill her if she is not able to figure out how to get it removed. She finds a note from her mother one morning that points her in the direction of Luke Bloom, the owner of the club Love Potion #9. It's a hot witch club that leans towards the naughty, with spelled drinks. Kenna and her friends head there only to find out Luke is not able to help, but he knows someone that would be able to, his sister. The only issue is that she's been MIA and not doing magic for 5 years. With time ticking down, Kenna has to find Lexy and somehow convince her to help remove the wraith before it kills her.

Savor is a fast paced adventure with engaging characters. I enjoyed seeing the vampire hunk from book one in this installment. I wanted more face time with him and I got it in book two. I like that there's a nice mix of paranormal in the series, succubus, witches, weres and vampires. It's well rounded and not just focusing on one specific type of paranormal. Savor does leave off where I'm dying to know what happens next. So I already know book three is going to be a must read for me. I suggest this series if you're looking for a succubus read!