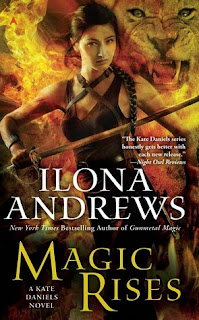 Kate Daniels returns in book six of the Kate Daniels series. This time around Kate and Curran are invited to go across the world to mediate and bodyguard a former acquaintance of Curran's the weeks before she gives birth. You see, the girl is pregnant with twins by two different fathers. Whoever's child is born first gets a prize pretty much. Each wants it, which leads to a lot of tension between everyone involved.

Magic Rises opens with two teens at the Keep running the risk of going loop. Going loop is a death sentence for any shifter. If they cannot maintain control of their shifter side they are putting everyone in danger. Curran is promised a medicine that will help children not go loop, if they go to bodyguard the girl Curran knew in his past. They are hesitant, but it's a necessary risk. There is another little twist to the story though, Kate has been hiding in plain sight for her entire life. A guy that works for her father was introduced a few books back, and I've been waiting for the big confrontation between the two.  Hugh d'Ambray wants to trap Kate into showing that she really is Roland's daughter. He'll have ample opportunity to do so while everyone is playing bodyguard. His ulterior motive is to divide and conquer though. I wasn't sure if the shifters brought along would be able to stick together, or if they'd crumble according to plan.

This review is hard to write. There is an epic battle in this book and more than one person was injured. Some of the ones we've grown to care about are injured to the point of death, and some do not survive. So emotional. I immediately wanted to know what happened next, so I've read the next book. I'll post the review for Magic Breaks up later this week. If you're looking for a Urban Fantasy series that just keeps getting better and better, I highly suggest the Kate Daniel's series.