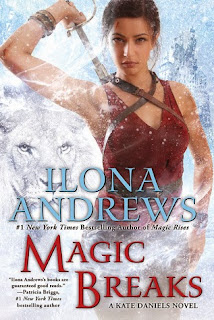 Kate Daniels returns in book seven of the Kate Daniels series. This time around Kate and Curran are back at the Keep and trying to prepare for what they know is going to come soon. Roland, Kate's father will come to take her out (and I don't mean to dinner) as soon as he finds out she is alive. Since they're unsure if Hugh survived the epic battle at the end of book six, they're just waiting and preparing as best they can. Curran is called away to join a hunt so Kate is left to attend a Conclave as the Alpha representing the pack. The Conclave is basically the top people from the pack and the top people from the People (vampires) sides meeting and discussing issues both have since the previous meeting. Low and behold, Hugh walks into the meeting and starts causing trouble. Let the cat and mouse game begin!

Hugh accuses one of the Pack of killing a high up member from the People. Now is the time for Kate and the gang to track down the crime scene and figure out who is behind the murder before the time runs out. Hot on the trail, Kate and a few others cross into dangerous territory in attempts to find out who is behind the murder and trying to stay alive in the process. And you know since Hugh is back and better than ever, Roland is not far behind...

Magic Breaks gives a warning at the beginning of the audiobook that this will read to be like the last book in the series. However it is NOT the last book, so don't be afraid, it does complete a major story arc though, which I was happy to see how that would turn out. I wasn't sure if everything was going to go up in flames when Kate met Roland, or what exactly would happen. It was pretty interesting read, and now I'm left wondering what the next major story arc be. All in all I'm adoring the audiobooks of this series, Renee Raudman's voice is perfect for Kate and the other characters. I highly suggest this series if you're looking for a paranormal book that will keep you on your toes.