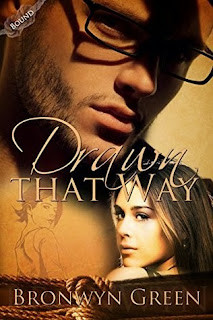 Tristan Weaver, accountant for a successful video game company, is in way over her head. Honestly answering a company-wide survey and criticizing the sexist stereotypes used in the company’s games was enough to catch her boss’ attention. But speculating on his sex life within his earshot has unexpected consequences when her hot, but nerdy, boss invites her to model for him.

Owner, artist and lead developer of Brecken Games, Rory Brecken, has a strict no fraternizing with employees rule. However, when he overhears Tristan’s conversation with her friend about his rumored kinks and begins to suspect her curiosity about the submissive side of sex, he’s more than a little tempted. When her interest is undeniably confirmed, he suggests a onetime only, colleagues-with-benefits hook-up.

Though neither want a relationship, once isn't enough for either one of them. As their encounters become more intense, Rory makes a huge mistake that may cost him the woman he’s coming to love.

Tristan Weaver is an accountant for a popular video game company. She's not one to mince words, so when the company satisfaction survey rolls around, she tells it like it is. That she thinks the females in the video games they make have unrealistic characteristics. You know the types if you're played a game that had a female character, they all wear skimpy clothing and have ginormous breasts. I'm going to guess it's like the romance genre and large dicks *coughs* When the owner of the company reads the surveys he spots the constructive criticism and decides to take action. Instead of firing Tristan, he hires her and two other females in the company to be models for new characters.

During their modeling, Tristan and Rory find their attraction coming to the forefront. They decide to embark on a no strings attached type relationship and just see where it goes. There is some kink in the novel which spiced it up a notch, so keep that in mind. I was really happy to read this one since the main character is an accountant and that's my day job. I don't think I've read many (or any?) with an accountant as the main character. The writing and plot were sound, and I really enjoyed Drawn That Way. If you're looking for an erotica book with a dash of nerdy you should give this one a try!

Follow my blog with Bloglovin
Posted by LilyElement at 12:00 AM