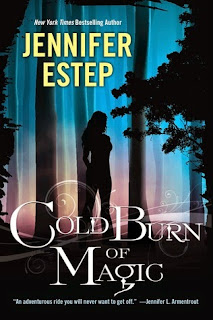 I've been a fan of JEstep's books for a year or so now, so when I saw this new series by her I jumped at the chance to read it. Cold Burn of Magic is a New Adult Urban Fantasy featuring Lila, a high school aged girl that attends school by day and a thief in her spare time. She's on her own since her mother's passing and manages to fend for herself by stealing whatever is requested and selling it to her contact at a local pawn shop. Lila is pretty skilled for being so young, she can sneak in and out of places and snag the goods she's after, mostly without being noticed. She also has a few magical powers that aid her in dire times.

Cold Burn of Magic is set in a magical town, the most magical place if the town's lore is correct. Since the people are open about their powers and the beings are visible in the open, the town draws quite the amount of tourists. There is a bit of everything you could dream up, pixies, trolls, etc. That's not all though, the town is run by several different magical families. The two strongest families, the Draconis and the Sinclairs tend to feud against one another. Think of the families as rival gangs or mafia, they're all out to get one another.

The action starts when Lila is waiting for payment on a stolen bauble and a guy with his friend and bodyguard are attacked in the pawn shop. She tries to stay out of it since this is clearly a fight between two families. Not wanting attention drawn to herself, Lila steps in when it becomes absolutely necessary and saves the day. This cements her into being the guy's new bodyguard and part of a Family she doesn't want to belong to. Devon Sinclair is a member of the Sinclair Family, one of the highest ranking families in the town. And that's when you know things are going to be interesting. Lila is forced to be a part of the world she tries so hard to avoid. How is she going to handle it and manage to survive while working through her bodyguard contract for the Sinclairs?

I had high hopes for Cold Burn of Magic and can honestly say it surpassed my expectations. The mythos is quite rich and enjoyable to read. The writing is on par with JEstep's other work, and it satisfied my need for another one of her books. The characters were interesting and engaging, and I felt like I was in all the action as it happened. I loved Cold Burn of Magic and highly suggest it if you're looking for a YA Urban Fantasy.