A to Z - Werewolves 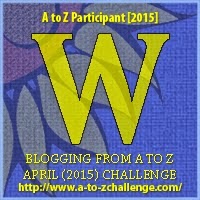 A to Z Challenge - W

*happy sigh* Werewolves are some of my favorite types of shifters. It brings me back to one of the first books that hooked me on the paranormal romance / urban fantasy genres.

Check out our previous A-to-Z posts: T, U, V


I feel like most of the books I've been reading lately have werewolves as a secondary character rather than the focus. So here are a few books that I've enjoyed in the last few years where at least one of the main characters is a werewolf.


I've only read the first two books in this series so far, but have enjoyed both!

Born the only female in an all male race, Jessica McClain isn’t just different—she’s feared.

After living under the radar for the last twenty-six years, Jessica is thrust unexpectedly into her first change, a full ten years late. She wakes up and finds she’s in the middle of a storm. Now that she’s become the only female full-blooded werewolf in town, the supernatural world is already clamoring to take a bite out of her and her new Pack must rise up and protect her.

But not everyone is on board. The werewolf Rights of Laws is missing text and the superstitious werewolves think that Jessica means an end to their race. It doesn’t help when Jessica begins to realize she’s more. She can change partway and hold her form, and speak directly to her wolf. But the biggest complication by far is that her alpha father can't control her like he can the rest of his wolves.

When a mercenary who’s been hired by the vampires shows up to extract information about the newly turned werewolf only days after her change, they find themselves smack in the middle of a war and there's no choice but to run together. When it’s up to Jessica to negotiate her release against her father’s direct orders, she chooses to take an offer for help instead. In exchange, Jessica must now swear an oath she may end up repaying with her life.

I've read the entire Naked Werewolf series and adore Molly Harper's writing style. If you haven't read these yet, I highly suggest them!

Even in Grundy, Alaska, it’s unusual to find a naked guy with a bear trap clamped to his ankle on your porch. But when said guy turns into a wolf, recent southern transplant Mo Wenstein has no difficulty identifying the problem. Her surly neighbor Cooper Graham—who has been openly critical of Mo’s ability to adapt to life in Alaska—has trouble of his own. Werewolf trouble.

For Cooper, an Alpha in self-imposed exile from his dysfunctional pack, it’s love at first sniff when it comes to Mo. But Cooper has an even more pressing concern on his mind. Several people around Grundy have been the victims of wolf attacks, and since Cooper has no memory of what he gets up to while in werewolf form, he’s worried that he might be the violent canine in question.

If a wolf cries wolf, it makes sense to listen, yet Mo is convinced that Cooper is not the culprit. Except if he’s not responsible, then who is? And when a werewolf falls head over haunches in love with you, what are you supposed to do anyway? The rules of dating just got a whole lot more complicated. . .

This is the book that got me hooked on the paranormal books!

Bitten - Kelley Armstrong (Women of the Otherworld)
Elena Michaels is the world’s only female werewolf. And she’s tired of it. Tired of a life spent hiding and protecting, a life where her most important job is hunting down rogue werewolves. Tired of a world that not only accepts the worst in her–her temper, her violence–but requires it. Worst of all, she realizes she’s growing content with that life, with being that person.

So she left the Pack and returned to Toronto where she’s trying to live as a human. When the Pack leader calls asking for her help fighting a sudden uprising, she only agrees because she owes him. Once this is over, she’ll be squared with the Pack and free to live life as a human. Which is what she wants. Really.

If you have any werewolf book suggestions let me know in the comments!
Posted by LilyElement at 12:00 AM