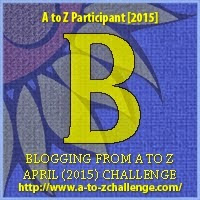 A to Z Challenge - B

I've been exploring the many different type of weres lately while reading. I've stumbled across a few Were Bears and they always intrigue me for some reason.
Here are two that I've read, I need to read more of them soon!

Check out our previous A-to-Z posts: A

Desperately Seeking Shapeshifter - Jessica Sims
Following the page-turning debut, Beauty Dates the Beast, this is the second novel in the fresh and funny new series about a paranormal dating service.

Sarah Ward, the werewolf sister of Bathsheba from Beauty Dates the Beast, and co-owner of their paranormal online dating agency, Midnight Liaisons, is voluntarily traded to a wolf clan in exchange for a kidnapped female were-cougar. Fearful of what might happen to her while with the wolf clan, she and Ramsey, a were-bear who’s part of the were-cougar alliance, pretend to be engaged so he can stay with her for protection. The last thing either of them expect is for their pretend engagement to lead to a very real love affair….

His Forbidden Mate - Gail Merriweather
Werebears and wolves don't mix. It's forbidden. So why does Katerina lust after the most desirable wolf in town?

Plus-sized Katerina Headley is on a mission. Her boyfriend of two years dumped her because she was 'too fat' and now she is out to prove that real men do love curves. On a night out of fun, she attracts more than her share of trouble and the sexiest wolf this side of the universe.

Liam Greyson is the heir to a billionaire fortune. He also happens to be a gorgeous shape-shifter with a killer bod. When he runs into Katerina, he is smitten with desire for her lusty curves. There's just one problem; he has a mate.

Due to an arraignment between his family and a powerful wolf clan, Liam must consummate his love for his mate on the next full moon. With his family's business on the line, will Liam find some way out of his predicament to claim the curvy Katerina as his own?


Have yall read any were bear books? If so let me know which to check out in the near future!
Posted by LilyElement at 12:00 AM