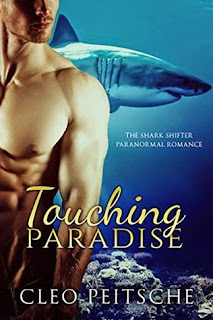 I snagged Touching Paradise because it was a freebie, and I've been trying to find some not the norm type of shifter books. This one, as you can tell by the cover is a shark shifter novella. Can't say I've been introduced to that type of shifter before so I knew I had to snag it. *plays Jaws music*

Monroe is a woman visiting a beach paradise for her friend's wedding. She's a bit sad though due to her boyfriend bailing on attending the wedding with her and in the fight that ensued he said some pretty harsh things, such as calling her boring. That's definitely not the type of guy I'd want to be in a relationship with, so I was hoping Monroe would cut loose the guy and have some fun on her adventure.

Koenraad is a billionaire shark shifter that is looking for his missing child. When he sees a local scuba/snorkeling tourist boat broken down in the middle of the ocean, he goes to investigate. This is when he spots a pretty lady in a bikini and decides to lend a hand. The two hit it off and some fun time ensues. I'm not going to get that into the story since it is a pretty short novella. I found the story kind of lacking, though I think that's partially my fault since I wanted a novel length story. That being said I'd definitely read the next book to see what would happen. If you're looking for a sexy shark shifter novella look no further.