Drea's Review: Of Silk and Steam 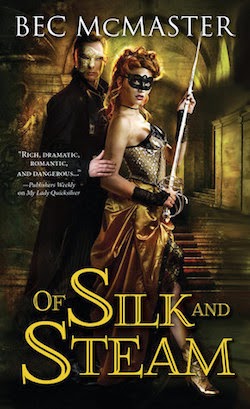 Mina owes everything horrible in her life to one man, the Duke of Caine. Ill and withdrawn from public life, Caine is untouchable. But his heir and proxy Leo Barrons is another story. At every turn she clashes with Barrons—politically, socially, and perhaps…lustfully. And then she discovers the means to destroy Caine and his heir. That is exactly what she wanted. Or is it?
Leo has wanted Mina since he witnessed her duel to earn her duchy years ago. Yet she credits his father with the death of her entire family. Of course, he’s got to become obsessed with the one woman who will never want him. Slowly chipping away at her reserves is the way to go. But only when she discovers his biggest secret does he realize what his true endgame has been all along—her, forever.

Of Silk and Steam is the fifth book in Ms. McMaster’s London Steampunk series. At this point I’ve read all but the first one. I can’t help but make comparisons between the books in my review.

Let me start by saying I don’t think a reader new to the series could pick this up and hope to follow along with what’s going on. There’s too much world building and backstory left out. And the reader needs a connection to the secondary characters to care about a good amount of the action.

When I saw this blurb, I thought Sweet! Another enemies to lovers trope. It’s going to be like the third book—my favorite. Unfortunately Of Silk and Steam is nothing like My Lady Quicksilver. Though Mina is meant to hate Barrons because of his father, she only pretends to hate him. Barrons has apparently already chipped away at her reserves a good deal prior to this story’s start. That’s not to say this isn’t a good book. Barrons’ wooing of Mina is in that tall, dark, and on the right side of sexy stalker range that makes reading their scenes a blast. I just didn’t get the same skin-prickling punch the third book gave me. Sigh, such a high is difficult to reproduce (seriously, go read the third book).

The romance in Of Silk and Steam, while scorching at times, takes a backseat to the heaps of series plot that gets tied up in this. And we do get a much needed look into a different side of London’s story (the Queen’s!).  Now I’m curious what comes after this.

This is an excellent addition to the series and a must read for fans...but definitely not the book to start out on. Given it was a bit slow to start and spent more time on the series plot than on the book's romance than I would have liked, I give it three and a half stars.
Posted by Unknown at 12:00 AM